Because I am currently in preparation to move to another city I went to IKEA the other day and had to think about a picture I saw there last year. It was this picture 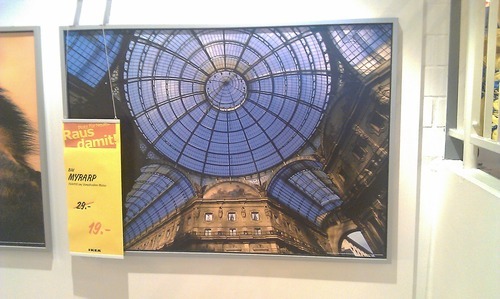 and as you can see it was on a special sale. Nothing interesting so far but I went to Milano just a few weeks before that and took this photo

It is the Galleria Vittorio Emanuele II, a structure formed by two glass-vaulted arcades intersecting in an octagon covering the street connecting Piazza del Duomo to Piazza della Scala. I didn’t know about this place before and was very happy to see that the angle of view that I had chosen was obviously also chosen by a “professional” to capture the place. If you have the chance to visit Milano you should not miss this amazing architecture (and the Duomo of course).

As some of you may have seen from the Basilica HDR post a few days back: I do like to play around with HDR photos. There are many tools out there but when it comes to open source software there is no way around luminance (formerly known as qtpfsgui). A number of people have asked me, since I am also using Photomatix Pro from time to time, how those two compare. I have prepared a photo album on flickr with some sample shots processed with both tools some time back. I try to update it from time to time but what you can see from the images in the album is that Photomatix tends to produce cleaner images with better noise performance BUT, and this really is a big but, there is a certain look that really seems to be only possible with luminance or more precisely with the Mantiuk tone mapping.

Cathedral in Frankfurt am Main, Germany processed with luminance:

And last but not least some people say that the handling of luminance is more difficult than e.g. Photomatix. I can not agree because you need to have some practise with Photomatix too and Luminance did a lot of improvements recently. So in my opinion it comes down to the look you wish to achieve for your photos.
Enjoy!

The new campus in Bielefeld, Germany is one of the biggest construction sites in North Rhine-Westphalia with an investment of over 1 billion €. The panorama was done with hugin from ~10 shots. I still think it is one of the best stitching tools out there and available for linux and mac.

This is pure drama!

The processing was done with luminance/qtpfsgui and it creates a very strong look that, in my opinion, works only with few scenes. But it does work for this one (HDR churches) and up to now I have not found another tool that is capable of producing this drama effect.

Meta Data and such

Not only because “meta data” has such a nice pronunciation, it is a very important part of every digital image captured. Well, obviously because you need to know when you have taken the shot but there is a lot more to learn.
More recently cams (read camera NOT smartphone!) do get integrated GPS receiver. This is nice, there are also other tools that I might post about some other time to sync e.g. a trip you recorded with your phone and with your photos, but today I want to talk about Exif data, which stands for Exchangeable image file format. Or the lack of it.

You may know that there are some basic fields, e.g. manufacturer, orientation, FNumber or Exposure time, that I at least like to check on flickr when looking at other photos. Sometimes I can learn from that.
But I recently noticed that The Gimp strips Exif information from tiff files. There is a workaround that says you can convert the image inside Gimp into e.g. jpeg and go from there – but lets assume you want to work with tiff (lossless) to e.g. further retouch the image in another program and the Exif data are gone.
So, here comes exiv2 to your rescue! It is available for Linux and Mac and lets you easily extract info from e.g. your RAW file and put it into your tiff/jpeg or other file.

So you might want to do something like this, assuming you are working with Canon RAW files (Nikon users imagine a .nef file):

NOTE: The ex option will create a binary file named after the image (IMG_0000.exv). To actually work like this the exiv file and the target file should be named alike.

You can do a lot of other stuff, e.g. changing only single values (date) but you should check the man page for more details and experiment a little. Have fun.

The “Federal Ministry of the Interior” in Berlin, Germany, located directly at the river Spree in Berlin Moabit. Processing was done with Photomatix and The Gimp following the instructions on http://www.schoolofhdr.com.

Following down the corridors of the Bielefeld University. This is an b/w HDR done with photomatix and The Gimp.